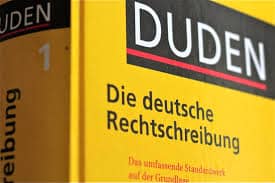 Since 1880 one name has been the authoritative source for the correct spelling, pronunciation and usage of German words: Duden. Duden is to German what the OED is to English.

Konrad Alexander Friedrich Duden was born on 3 January 1829 in Wesel, Germany. After completing his secondary education, he studied history and philology at Bonn where he was a member of the Wingolfsbund student society and took part in the uprisings of 1848, known as the March Revolution. After a spell as a home tutor in Genoa, Italy, where he met the daughter of the German consul whom he would later marry, he returned to Germany and took up the position of Gymnasium (high school) teacher.

Throughout his life he was dedicated to the simplification and unification of German orthography, and after rising to the position of headmaster, he published his first work on the subject of spelling for his school in 1871. This was followed in 1872 by Die deutsche Rechtschreibung. Abhandlung, Regeln und Wörterverzeichnis and then in 1880 by his most important work, Das Vollständiges Orthographisches Wörterbuch der deutschen Sprache or Complete Orthographic Dictionary of the German Language.

In 1902 the German parliament confirmed the Duden as the official standard and was quickly followed by other German-speaking states. 26 editions and over 100 years later, the Duden remains the prescriptive source for spelling in German. Konrad Duden died in 1911.

Today’s German teaching is based on Duden’s orthography. You can learn German in London with our experienced native tutors. You can contact us by email or telephone for further information on our range of courses.