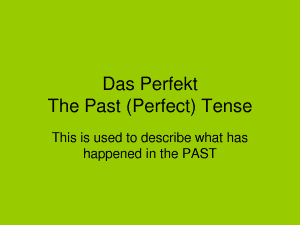 We have had a look at the Present Tense and Simple Past in one of our previous blogs. This blog is dedicated to the Perfect Tense in German. Many of you, who have already begun to learn German, may have heard that the Perfect is more commonly used in spoken German than other tenses describing the past. That is only partly true: in northern Germany, the simple past is still used in spoken German, whereby in southern Germany the Perfect is more often used.

The Perfect is formed with an auxiliary and the past participle of the verb. The auxiliary verb retains second position, as described in this blog article about the position of the finite verb in German. The participle is placed right at the very and of that sentence or clause.

The participle of regular verbs is formed with the prefix ge- and the suffix –t added to the stem of the verb. Irregular verbs form their past participles in unpredictable ways and they can be found in the irregular verb list of any German dictionary.

Whilst having taught the German language in London for many years, I have noted the difficulty many speakers face when choosing the right auxiliary verb: German forms the Perfect with the help of two auxiliary verbs, sein (to be) or haben (to have). The majority of verbs use haben. If the verb conveys movement from A to B or a change of state, then we use sein to form the perfect. That also applies to the verbs sein, bleiben and werden.

If you remember to use sein  with verbs that convey a change of position or condition plus the three verbs above, then you know how to form the perfect for about 99% of all German verbs.

One thought on “The Past Perfect in German”