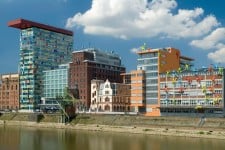 There are many reasons for visiting Germany. Taking German lessons here in London before you go, can only enhance your experience. And there has never been a better time to go! In an annual survey about the quality of life in cities around the world conducted by Mercer, the global consultancy, seven German cities are in the top thirty with three in the top ten.

The survey is designed to help international companies work out relocation packages for employees on foreign assignments and is based on several factors including housing, healthcare, social life, and education. However, it is also a useful gauge for tourists and business travellers.

Munich came fourth and, with its stunning location at the gateway to the Alps, is a beautiful place. The River Isar flows through the city and there are many green outdoor spaces. It is a very culturally active city with a large number of museums, galleries and churches to visit along with a vibrant theatre and music scene.

The Olympiapark, built for the 1972 Olympics, is a wondrous place and the stadium with its soaring curved glass roof still looks futuristic today.

Bavaria is famous for the quality and purity of its beer and there are several beer festivals in Munich throughout the year culminating in the world renowned Oktoberfest.

Düsseldorf, rated sixth, is situated on the banks of the mighty River Rhine. The Altstadt is where you will find most of the historical and cultural venues along with the “longest bar in the world”, a street of around 260 pubs!

The reinvigorated harbour area of the MedienHafen has been tastefully updated while retaining many of the original features of the docks. Many companies now have offices here and the wide variety of modern bars and eateries are frequented by business customers during the day while in the evenings it is the place in which to be seen by the in-crowd.

Connecting the Altstadt with MedienHafen is the Rhine Embankment Promenade which was reclaimed by building a tunnel for the main road. Now you can enjoy the river walks and cycle paths while watching the river life, oblivious to the traffic beneath.

Frankfurt, at seventh, is the financial and business centre of Germany, home of the European Central Bank, and has an amazing futuristic skyline. It also boasts Europe’s third largest airport making it a major international transport hub.

However, away from the skyscrapers you can find streets of beautifully preserved 19th century buildings and parks. Römerberg is the historical centre of the city where you’ll find 14th and 15th century buildings with many shops, bars, restaurants and museums.

Alongside the commerce and cultural delights of Frankfurt, you can also escape the hustle of the city in Germany’s biggest inner-city forest, Der Stadtwald, with its walking paths and attractive ponds.

The other four cities are Berlin, Hamburg, Stuttgart and Nürnberg. Vienna, Austria, where the German you learn will also be useful, came first in the survey, while London managed 40th place.

One thought on “Germany’s most liveable cities”