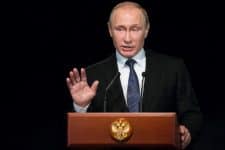 When taking German lessons or attending a German course, you’ll come across many German words of foreign origin. German, like other languages, borrows words typically from Latin, Greek, English and French. Less well known are Russian words that have made their way into the German language, often through the linguistic development of the part of Germany that lay behind the Iron Curtain.

The word der Kosmonaut is the counterpart to the English term Astronaut.

Kosmo- from Greek kosmos meaning outer space and –naut from Greek nauta meaning navigator – therefore, Kosmonaut is the one navigating the outer space.

Kreml (Kremlin) – meaning fort – is nowadays the epicentre of power in Russia from where Mr Putin pulls the strings. Mammut (mammoth) – meaning tusk from the earth –is usually left when one of these mammals is excavated in the Russian Steppe. We have another German word of Russian origin, die Steppe – meaning treeless and barren land.

Die Troika from Russian tri meaning three – Troika – group of three. Are there any other German words of Russian origin that you know?