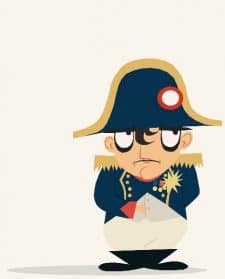 Do you know what Gallicism are? Gallicisms are words from French that have found use in another language. When learning German, you will come across a lot of Gallicisms. They found their way into the German language during the reign of Louis XIV, who was revered across the German aristocracy. Amusement, fashion, cuisine, the military are all domains using words that are borrowed from French. For example das Ballett, das Turnier, der Chiffon, der Satin, die Frisur, das Kostüm, der Gobelin, das Dessert, die Kreme, der Kaffee, die Kantine, die Kolonne, der Veteran.

Till the late eighteenth, lectures at German universities were in Latin, and the German aristocracy spoke French and only plebeians, of which were many, spoke German. All that came to an end when Napoleon occupied large parts of German territory, and people developed a national pride and pride in their language. Gallicisms in the German language have been in decline since the Napoleonic wars. Who would have thought?

One thought on “What did Napoleon do for the German language?”