Why learn German you may ask? Please read on … 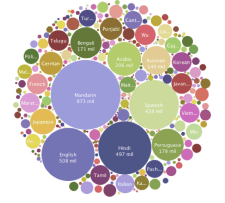 There are about 7,000 languages worldwide. Many languages are threatened by extinction, especially languages spoken by natives in Asia and America.

Eight languages are so called world languages with more than 150 million speakers each. They are Chinese, English, Spanish, Hindi, Arabic, Portuguese, Bangla and Russian.

German, Latin, Slavic and Greek are all Indo-European languages. It is thought that all languages originate from one language over 100,000 years ago.

Most languages are spoken in Africa and Asia. Top of the chart is Papua New Guinea with 820 languages.

Only ⅓ of all languages have writing. Most languages are solely spoken.

There were 9000 languages in 1000 B.C. Today we are left with 7,000 languages. The number of languages is in decline. Dominating countries are the cause as is the wish to communicate in a globalised world.

If I have done my homework correctly, then I can say with certainty that 1.571% of the world population speaks German. You may wonder if there is any need to learn German. Yes, there is because that percentage represents over 110 million people, most of which live in Europe.