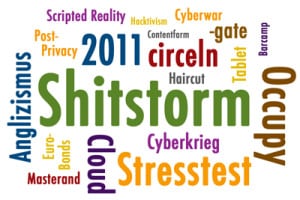 Each year, Germany votes for an Anglicism of the year. The Anglicism has to be an English word that was widely used in Germany throughout that year. The new word must also fill a gap in the German language by either further differentiating the meaning of a particular word or by providing a new word that didn’t exist in the German language before. But it cannot be a product name.

A jury, made up of a group of linguists, votes for the Anglicism of the year. Anyone can suggest an Anglicism. The words that made it into last year’s final were:

The suffix –gate came into German in 1972 with the loan word Watergate(-Skandal). In English, the word component –gate is used to name all types of large scandals. It took until 1987 till the suffix –gate­ made it again into German with a political scandal that was renamed Waterkantgate. Ever since, many scandals were renamed with the suffix –gate and in 2013 there were more than a dozen scandals amongst which were Handy-Gate, Dirndlgate (also known as Brüderle-Gate) and Mops-Gate.

In the case of –gate, the word tends to describe, unlike in English, more trivial scandals, but can also be used to describe bigger scandals, for instance Handy-Gate – the scandal of foreign intelligence services bugging Angela Merkels mobile phone. Handy is an Anglicism in itself and means mobile or cell phone.

One thought on “German Anglicism of the Year”