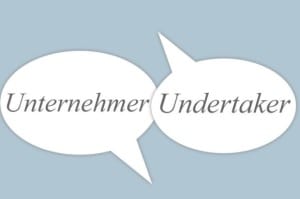 Germans are loyal and trustworthy folks. However, there are some false friends in the German language that may confuse the English speaker or his mind.

If the German finance minister says that 2 Billionen Euros are sufficient to bails out Greece, then he’s got his figures right because he actually means two trillion. A billion in German is a trillion in English.

Being told in German that taking Gift is to be avoided shouldn’t be surprising, not because Germans have ulterior motives, but because Gift in German means poison in English.

The word Star in German means starling or cataract; the German equivalent for star is Stern.

Winken is to blink and not to wink, der Akt is not the deed but nude artwork. After is not after, but is located behind and means rectum. Bald is not bald, but means soon.

Confused? Refresh your German and book one of our private German tutors.

One thought on “False friends in German”