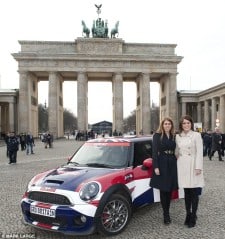 Over the years, Germany has had a large British expatriate community, mainly through military personnel stationed there since 1945.

Then, there was an influx of British builders & workers in the seventies and eighties who came to work in Germany – immortalised in the television series Auf Wiedersehen Pet! However, they did not settle permanently, but went back to the British Isles as the economy improved.

Since the early nineties, there has been once more a steady influx of British professionals & today approximately 96,000 Brits are working & living in Germany. Most of them are young professionals: age group is between the years 25 to 40.

British expatriates in Germany enjoy the relatively high standard of living & safety of the country. In comparison to the UK & other EU countries, Germany has low levels of crime &  higher standards of living.

What about the German language you may wonder? Most Germans speak English & are more than happy to practise their English instead of speaking German. Hence, it is possible to get-by in every day life just by speaking English.

But, in order to work & fully integrate in Germany, it is vital to speak the native language. Maybe you are thinking of relocating to Germany & are thinking of attending German classes, or hiring a German tutor in London? Then, get in touch!

One thought on “British Expats in Germany”