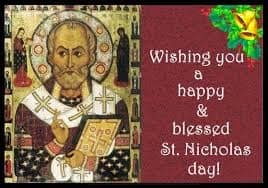 Saint Nicholas Day, Nickolaus Tag, celebrated just three weeks before Christmas, has to be one of the most joyful events in the German calendar. This festival for the patron saint of children falls on 6 December, when he is said to have performed many miracles. Children write letters on the day before the festival and leave them on a plate or in a shoe along with food for his white horse or donkey, hoping that Nickolaus will bring them gifts when he visits in the night, accompanied by his helper Ruprecht.

Sankt Nickolaus carries a book detailing all the children’s deeds which tell him whether they’ve been good. If they have, he rewards them with fruits, nuts or candles. If not, their shoes or plates may instead be filled with potatoes, coal or twigs. Sound familiar? That is, of course, the very same St Nicholas from whom the American Santa Claus and the British Father Christmas are derived, which must make him one of Germany’s most famous exports.

He’s not to be confused with Father Christmas, though; they are two separate people to Germans. The traditional St Nickolaus is not clothed in the famous red suit and hat; instead, he wears the robes and mitre of a bishop. Indeed, he’s thought to be derived from a Greek Christian bishop from Myra in modern-day Turkey who was famed for giving gifts and died on 6 December in 346.

Whatever his origins, his legacy is a delightful tradition that has spread to many parts of the world. If Saint Nicholas should leave your shoes empty, why not treat yourself to one of our German courses and maybe next year, your good deed will find its way into his book.