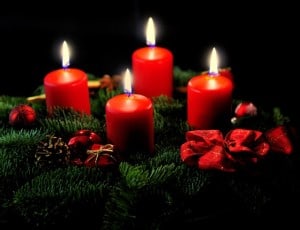 Although in some regions of Germany, the start of the Christmas season is heralded as early as 11 November on St Martin’s Day, it officially begins on the first Sunday of Advent, which this year fell on 1 December. German children, like British ones, open the first window on their Adventskalender on this day. Still, it’s a day on which another well-established German countdown to Christmas begins: the advent wreath or Adventskranz. Four candles mark the passage of each Sunday until Christmas. The first is called Green Sunday (Grüner Sonntag) for the evergreen leaves that form the wreath. The following Sundays are Kupferner Sonntag, Silberner Sonntag, and Goldener Sonntag for the copper, silver and gold decorations that adorn it. Sometimes a fifth candle, the Christ candle, is lit in the centre of the wreath on Christmas Eve or Christmas Day. The advent wreath dates back to pagan times, but the custom made a comeback in the 19th century and gradually regained its popularity, spreading to most German homes by the end of WWI.
Variations on the advent wreath have been adopted beyond Germany, but there’s one German tradition that has become synonymous with Christmas throughout the Christian world: the Christmas tree or Tannenbaum. Germany started the modern custom of bringing decorated trees into the home in the 16th century. It’s thought that Martin Luther first added lighted candles after glimpsing stars twinkling amidst the evergreens as he walked home one evening – and so a tradition was born. And though it was not adopted in Britain and the US until as late as the 19th century, it’s now hard to imagine Christmas without it.

One thought on “German Christmas Traditions”