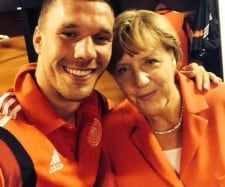 If you’re a World Cup fan, you’ll inevitably have seen, or at least heard of, Germany’s epic opening match where they walked away from Portugal with a 4-0 win. Hooray for Deutschland!

To offer her congratulations in person, German Chancellor Angela Merkel travelled across the globe to Brazil to watch the match for herself and even joined the sweaty players back in the locker room post-match to celebrate and pose for lots of pictures.

You may or may not know that Angela Merkel – Germany’s much loved Chancellor – has adopted the nickname ‘Mutti’, which translates from German to ‘Mummy’, because of her caring, modest, yet strong image. It was only a matter of time then before someone coined a clever phrase, and it was ‘#Muttivation’ that spread like wildfire throughout twitter. Cleverly, this portmanteau can be recognised in both German and English; crossing ‘Mutti’ for Mummy, and ‘motivation’, which of course she was providing plenty of to her nation’s football team.

Learn even more about the ways we coin phrases in different languages by learning with a German tutor in London, and get in touch to begin your linguistic journey!

Isn’t it interesting how we can play with words across different languages – what do you think? Comment below!