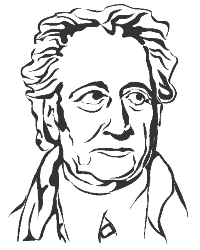 In our last blog we looked at the work of the Goethe Institute in promoting the study of German around the world. This week, we  explore something of the life and work of the man after whom the institute is named, Johann Wolfgang von Goethe.

Goethe was a hugely influential writer, philosopher and politician. Born in 1749, his large body of work comprises poetry, novels and plays, including the famous drama Faust. He also penned memoirs, literary criticisms and significant scientific works. His poems were set to music during the eighteenth and nineteenth centuries by major composers including Mozart, Beethoven, Mahler and Wagner.

In 1770, during his time as a law student, he launched his prolific writing career with the anonymous release of a collection of poems, entitled Annette, written about his love for Anna Katharina Schönkopf. After completing his degree, he continued to pursue his literary ambitions whilst supplementing his income by practising law.

His fortunes changed, however, in 1775 when he was invited to the court of the Duke of Saxe-Weimar-Eisenbach because of his fame as an author. He settled in Weimar and held a succession of offices in the Duke’s employ, in time becoming his chief adviser. Through his position and his works, his ideas on many subjects came to be widely accepted. He was one of the leading members of the cultural movement known as Weimar Classicism and is cited as an inspiration to eminent philosophers such as Nietzsche, Jung and Wittgenstein.

Goethe died in 1832, aged 82. His many achievements can’t possibly be covered in one short blog but his legacy and influence endure to this day.