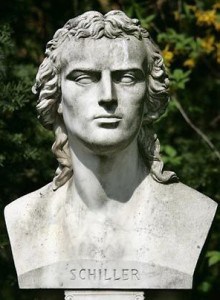 Continuing our series of blogs on influential Germans this week, we look at the life and work of the poet, historian, philosopher and playwright Friedrich Schiller.

Schiller was born in November 1759 and received his early grounding in language through the Greek and Latin tuition he received as a boy. He is considered Germany’s most important classical playwright and in 2008 was voted by viewers of TV channel Arte as one of Europe’s most influential playwrights, second only to Shakespeare. He wrote his first play, The Robbers, whilst still at school, which became an overnight success despite shocking audiences with its republican ideals. These ideas later saw him invested as an honorary member of the French Republic.

During his time at school, he read Goethe, among other noted authors, and in later life formed a strong friendship with the subject of our last blog. It was to prove productive. Goethe encouraged Schiller to return to playwriting and complete works he had left unfinished. The two founded the Weimar Theatre together, leading to the renaissance of drama in Germany and the movement known as Weimar Classicism.

Schiller suffered a series of illnesses throughout his life which, having trained as a doctor, he attempted to cure himself. But at the age of just 45, he fell victim to a disease that could not be cured and succumbed to tuberculosis. During his short life, he produced a number of notable works, including The Wallenstein Trilogy, Mary Stuart and William Tell. After taking a German language course in London with our native tutors, you could enjoy these works in their original language.