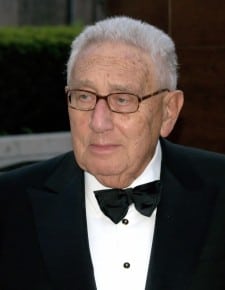 Unbeknown to many, a German served as the 56th Secretary of State from 1973-1977 – Henry Kissinger. Although he became a well-known face in politics, he came from humble beginnings in Bavaria, Germany. His father was a teacher and his mother a home-maker. They were German Jews, and in 1938 had to flee to the safety of London and later, New York.

Although he settled into American life as a child, he never dropped his German accent. After school, he joined City College of New York briefly before he was enlisted into the US Army in 1943. During his stay in Carolina during the war, he became an American Citizen. Due to his intellect and ability to speak German, he was assigned to the Military Intelligence sector and served for three years before leaving the Army in 1946.

After graduating from Harvard in 1950 with a degree in political science and MA and PhD in the four years following, he took the role of director, both for the Nuclear Weapons Foreign Policy and for Harvard Defence Studies until 1971.

He became a supporter and an advisor to the New York Governor, Nelson Rockerfeller and the National Security Advisor when Richard Nixon won the Presidency. He was appointed as Secretary of State during this time and remained in the role when Gerald Ford became President.