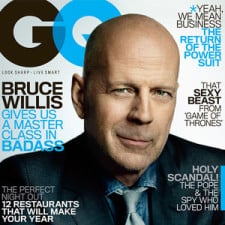 It is a little known fact that actor Bruce Willis is German. He was born as Walter Bruce Willis in 1955 in Idar-Oberstein, West Germany and, although his father was an American soldier serving in Germany, his mother, Marlene, was German. His father, David, moved the family to New Jersey, America on his discharge from the army in 1957.

Young Walter was plagued by a stutter but he found that when on stage he could express himself more easily and the impediment seemed to miraculously disappear. He joined the school drama club and his future was set, although it was to be a long time before he found fame.

He took on various jobs to support himself such as security guard and private eye before enrolling in a university drama programme for two years. Later, after moving to New York, he worked as a bartender whilst attending many auditions until he got some off-Broadway theatre roles.

His big break came when he moved to California and, after playing some small TV parts in shows such as Miami Vice and The Twilight Zone, auditioned for the lead role in the comedy drama series Moonlighting in 1985, beating off opposition from 3000 other hopefuls. The success of the show, which lasted for five seasons, launched his career.

His first starring role in films came in 1987 in Blind Date, but it was his star turn as hero John McClane, who finds himself “in the wrong place at the wrong time”, in the Die Hard movies, in which he did many of his own stunts, that propelled him to superstardom.

Although his popularity has had some dips after performing in some box office flops, he has always managed to bounce back and maintain his A-List status.

Bruce has also had a music career, releasing three albums of his own as well as performing on some of his film soundtracks.

His German heritage has certainly not been a disadvantage for Bruce Willis and, in fact, it is advantageous to be able to do business in Germany. You can now learn German in the City of London without even leaving your office.