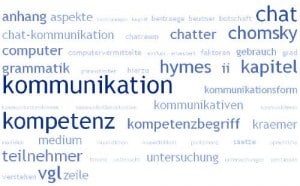 A frequency dictionary can be of great help when learning German. It does not, however, replace a good conventional bilingual or monolingual dictionary.

Let’s have a look at a few German words and their frequency in the German language: the most frequent word being the definite articles der, die, das and their various forms. You may already know that German has three definite articles depending on the gender of nouns. No doubt, your German teacher has stressed the importance of learning the gender of nouns. The definite articles occur about 155,000 times in every 1 million words. In other words, not knowing the right articles, has the potential of  making 1.5 mistakes with every 10 words; thus stopping you from speaking German fluently. The second most occurring German word is und which is a straight forward coordinating conjunction that joins two main clauses. The word sein occurs 24,500 times per 1 million words, but only if we are talking about the verb. The word sein as a possessive pronoun only has 3,650 occurrences per 1 million words. This shows, that besides the meaning of a word, it is vital to know its function and how to use it in the German language, i.e., how to conjugate a verb or how to decline an article.

Unless you already speak German at an intermediate or advance level, there is no need to buy a frequency dictionary. But that does not prevent you from learning frequent words or from making your own German vocabulary lists according to word frequency. Learn the vocabulary by knowing the meaning of the German word in your language and then recall the word in German. Recalling a German word will be much more challenging than knowing the meaning, but is vital when speaking accurate German with a degree of fluency.

One thought on “Understanding word frequency”