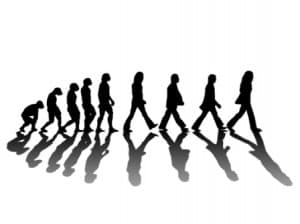 I am often asked during my lessons how German as we speak it today came about. The modern German language, or standard German, which we know today has evolved over a period of centuries just as English has developed from Old English through Middle English to the tongue we speak today.

Old High German probably became distinct from the West Germanic language which also gave rise to English and Dutch between the 3rd and 9th centuries. The key factor in this divergence is known as the High German consonant shift, and it’s worth understanding some of the changes this brought about as it explains how certain sounds are related to their English equivalents and can therefore assist our comprehension of today’s standard German.

Our “p” sound shifts to “pf” or “ff” in German, depending on its position in a word, as can be seen by the relationship of words like penny and Pfennig, pepper and Pfeffer, ship and Schiff, sleep and schlafen, apple and Apfel, hope and hoffen.

Similarly, our “t” sound corresponds to a “z”, “s” or “ss” in German, as in ten and zehn, sit and sitzen, bite and beißen, out and aus, eat and essen.

Understanding something of the history of a language can be a useful learning aid, but by far the best way of learning is through tuition with native speakers. Get in touch to book your German course with our native tutors.

One thought on “The evolution of German”