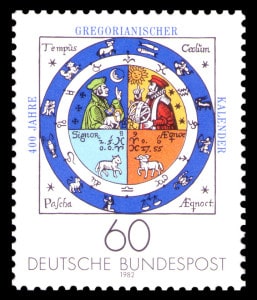 Germans, like many others around the world, celebrate the end of the old year and the beginning of a new one with festivities and fireworks. Others opt for a quiet night in watching “Dinner for One” on TV, a British sketch from the 1920s which has become an unlikely New Year’s tradition in Germany despite being virtually unknown in its country of origin.

The changing of the year is known in German as der Jahreswechsel and New Year’s Eve is known as Silvester or der Silvesterabend, after Saint Silvester (der heilige Silvester), a 4th-century pope who converted the emperor Constantine to Christianity and, according to legend, cured him of leprosy. His feast day falls on December 31, and since the adoption of the Gregorian calendar over 430 years ago, his name has come to be used as the name for New Year’s Eve in Germany as well as in several other countries.

If you’re wondering how to wish your German friends Happy New Year, you could say “Prosit Neujahr!” or you could wish them “einen guten Rutsch!” There’s some debate about the origins of this expression; it may be derived from the verb rutschen (to slide) or it may have come into German via Yiddish as in Rosh Hashanah (a good beginning).

The beginning of a new year (der Jahresanfang/Jahresbeginn) in Germany as elsewhere is a time for looking forward and making resolutions for the year ahead. Why not make one of your New Year’s Resolutions (Neujahrsvorsätze) to improve your command of German or to start your learning journey with private German lessons with our native tutors?