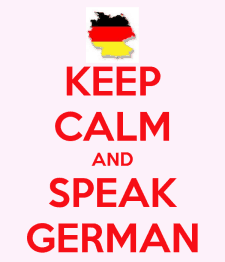 German is widely spoken in Europe: Count the 83 Million inhabitants of Germany, add Austria, the German speaking part of Switzerland plus Luxemburg, and German speaking minorities in Northern Italy, Southern Denmark and the Alsace in France and you get the picture. Of course, there is more than just the holiday aspect, since Germany is not exactly renowned for its glorious holiday resorts by the sea. It is more the practical aspect of course: think of all the business opportunities. You needn’t be fluent but a few basics could open doors and make business in Germany a little easier.

Thinking of studying in Germany? This may sound like a distant dream to any UK student but there are still universities in Germany that charge no or very low tuition fees (Berlin is only one of them). Typically the cost of living is comparatively low in Germany, unless you live in Munich, Hamburg or Baden Baden. Therefore you may find yourself NOT being burdened with huge debts to pay off after graduation.

German and English go back to the same West Germanic dialect. Can you believe that at some point in history a person from let’s say Hamburg probably would have had only minor trouble understanding a person from let’s say Winchester? “Funny accent”, they would have thought about each other…Unfortunately this is a very long time ago and not the case anymore. But a few centuries, a great vowel shift plus a few French and Scandinavian invaders later we can still find prove in the vocabulary: House – Haus, beer – Bier, wine – Wein being the most obvious ones. The list could be extended with verbs like make – machen, say – sagen or adjectives like small – schmal, round – rund.

Does learning German sound like a good idea? Would you like to learn with a German tutor in London? Then get in touch.

Is our list missing a reason? We look forward to hearing your comments!

One thought on “Reasons to learn German”