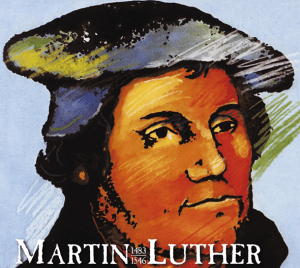 Few people can be unfamiliar with the name Martin Luther, the German theologian and instigator of the Reformation. The story of Luther posting his disputations of some of the doctrines and practices of Roman Catholicism, his 95 Theses, on the door of his local church in Wittenberg is exceedingly well known, even though some scholars doubt whether this famed incident ever actually took place.

Luther though, apart from being the author of a massive change in the religious landscape of Europe, also played a major part in the development of German as we know it today. During his captivity at Wartburg Castle from 1521-22, he commenced work on translating the New Testament from Greek into German. His aim was to make the Bible accessible to as many people as possible, so he went to some lengths to ensure that his translation could be understood by northern and southern Germans alike, despite their many different dialects. His research took him out into local towns and marketplaces so he was able to use contemporary language in his Bible so, as he said, “people may read it without hindrance”.

Luther’s New Testament was published in 1522 and followed in 1534 by a translation of the whole Bible. The publication came at a time when printed books were beginning to circulate widely. Luther’s vernacular style won widespread praise and his German Bible became hugely influential in shaping the language. The Saxon dialect used by Luther became the common literary language from which today’s Standard German evolved and his translation had an impact in Germany and beyond which he could scarcely have anticipated.

Enrol on a German language course with our native tutors to learn the language bequeathed to us by Luther and his contemporaries.